Coniferous Forests – In coniferous forests and plantations you often find that the trees are tightly packed together. This tight packing leads to the canopy(top layer of a forest) being so dense that little/no light hits the ground below. This means younger plants find it difficult to grow on the forest floor. The lack of younger/smaller plants reduces the food source for surface living animals. In these woodlands some insects/birds are a able to survive. These conditions lead to significantly reduced biodiversity in coniferous woodlands.

Deciduous woodlands – These woodlands have significantly higher levels of biodiversity. Deciduous woodlands offer a variety of layers/structures/environments that lead to both plants and animals thriving. In practice the different layers are often difficult to identify, but in general when looking vertically there are four distinct layers; ground layer, field layer, understory and canopy. 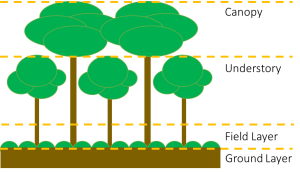 Ground Layer: The bulk of the ground layer is made up of decaying leaf litter and wood. This decaying matter is often referred to as biological detritus. This habitat offers the ideal environment for mosses, fungi, ivy and insects. The level of biodiversity of this layer greatly depends on the amount of moisture found.

Field/Herb Layer: This layer often relies on reasonable levels of light reaching the forest floor, hence why it is not seen coniferous forests. This layer is most diverse/developed in clearings and recently coppiced areas. The diversity is also affected by the size of the clearing and the type of trees found locally. Common plants found within there areas include: bluebells, wood anemone, bramble, wood sorrel, primrose, grasses and ferns. These plants offer a rich food source for insects, birds and other animals.

Understory/ Shrub Layer: This layer sits between the Field Layer and Canopy. It is dominated by younger versions of local trees and species that require lower levels of light. Species which require lower levels of light include; hazel, holly, hawthorn and rowan. The extent of this layer is often significantly reduced by the presence of grazing animals such as deer, cattle and ponies. You’ll often be able to identify a clear line to which these animals are able to graze.

Within some woodland the rhododendron has become a dominant species, often dominating the shrub layer. The non native rhododendron often greatly reduces the diversity within the shrub layer, killing off some species and preventing others from growing. Many woodland management programs involve the irradiation of this species from the understory.

Canopy: The canopy is created from the branches and leaves of the oldest trees within the woodland. In the late spring/summer the interlinking branches covered in leaves significantly reduces the amount of light hitting the forest floor. This is often why you find field/herb layers flourish in the early spring. The Canopy acts as a home for birds and other tree dwellers (e.g. squirrels).

The horizontal structure of a woodlands varies significantly and can be affected by numerous influences. These include natural influences e.g. land topography, water ways, weather, pests, tree diseases, rocks, soil etc. However, the structure of a forest can also be significantly influenced by humans. The most obvious difference being between plantations and wild stands. The diagram below shows some of the different structures encountered in managed woodlands.

As you can see a number of managed woodlands are now encouraged to include openings. These openings are designed to encourage the growth of other plants and support biodiversity. Openings/clearings and edges receive the most light as the canopy does not block out the sun. Consequently, you find a greater diversity of field/shrub layer plants and also animals. As you move deeper into woodland (especially in wild stands) you tend to find reducing levels of diversity and older more established trees.